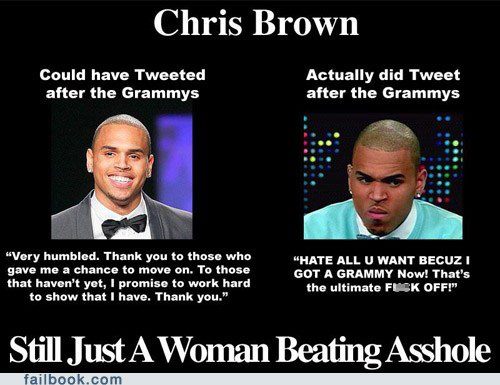 Today I heard a celebrity rumour that might clear a few things up. The rumour? That Chris Brown, famous for beating the hell out of Rihanna and refusing to accept that he has anger issues and problems taking any form of criticism, has allegedly been having a sexual relationship with another male R&B singer “Martyn”. A series of screen shots of twitter direct messages between the two has Chris talking about being fucked by Martyn and loving every second of it, while still putting Martyn down because he’s a nobody and Chris is a star.

Well Chris, Martyn seems to be undermining your macho swagger just a touch. Swagger that in my opinion is all talk. Your window smashing outburst after an interview in NYC that mentioned the Rihanna beating and your arrogant tweet (above) after the Grammy’s and all the antics of a spoilt brat tell me that maybe you don’t like yourself very much. Maybe if you took a more honest approach to life, your violent history and now your possibly broader sexual identity, you might actually be able to cope with a little criticism, even laugh it off, and lead a much less defensive life.

I would say even the most flamboyantly camp man, who is open and honest with himself, his sexuality and who he is will always be much more of a man than anyone who beats their girlfriend into a hospital then refuses to take full responsibility and grow up.

There are people who I’m more disturbed by than Chris though. All those girls who tweeted that Chris could beat them anyday because he’s “so hot” seriously need to look into their self esteem issues.

*All of this is alleged, nothing is confirmed. I don’t want to get sued. Even though Martyn swears it’s all true.